Learning with Minetest Part 3: Impact on the Students 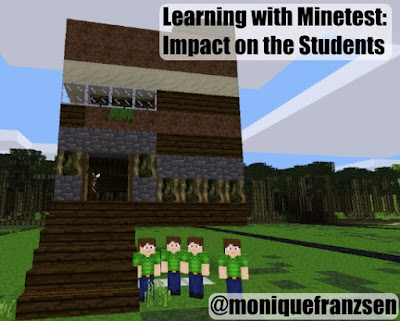 Our Minetest experiment has ended for the moment. During the last month my Pre-Primary and Junior Primary students have been exploring the game Minetest in their IT time. This post will discuss the impact that Minetest had on the students.

Spatial awareness:
Students have had to learn how to use both the keyboard and mouse independently. Minetest has been an enormous motivator for children to become comfortable with manipulating the controls with both hands working independently of each other. I have been surprised by how quickly the reluctant children became able to move around the game world. Every child that played was able to complete the basic movement training within half an hour, even those who had never played Minecraft.

Many discussions were had about in-game appropriate and inappropriate behaviour. Children asked permission when working in another person’s building space, collaborated together on activities and also dealt with situations that were not positive. Every class used a ruleset which emphasised appropriate behaviour and we used that as a framework to structure how we played the game. Multiplayer games are extremely common in this age range and much as we model correct choices and behaviour in the classroom, Minetest was a great space to model appropriate choices and behaviour in an online space.

Students navigated a 3D world space and created structures in it. They had to design what they wanted to build, gather resources for it, work out the different properties and mechanics of the game world and adjust their plans based on other builders. Some children began to investigate deeper mechanics such as creating tools to increase complexity of what could be built.

All students discussed the difference between playing on the internet at home and playing Minetest in a school environment. We talked about safety when playing on the internet and the differences in the rules due to Minetest being played with a teacher. Much of the online safety discussion intersected with the social and emotional development aspects, as we talked about our behaviour in a game-space and how we could work together in a positive way. The Grade 3 classes talked about ‘trolling’ and ‘griefing’ (destructive/abusive behaviour) in online games and what we could do about it.

Even though we have only ran Minetest as a pilot for 1 or 2 sessions per class, I the students developed a lot of key skills. Some of these were deliberate aims, such as digital skills and online safety, but many developed that I hadn’t considered before running the game:

Areas of the JP Technology Skills Checklist 2016 (Grade 3) that were developed using Minetest:

Minetest is a learning tool that is highly motivating for children because it mimics many gameplay elements of the popular Minecraft game. Minetest is appealing as a teacher because much of the uncertainty of online play has been removed, we only run our game within the computer lab. Because of this, it allows Minetest to be available to use to pursue learning goals. A 3D world space where the students can create their own structures makes it an ideal place to explore perimeter and area. The cube-shaped blocks allow for construction challenges or counting games. Schools around the world have used Minecraft in all areas of their curriculum and Minetest can work in a similar role.

If Minetest was used again in the computer labs I think that I would see it’s value as a learning tool increase now that most children that I teach are comfortable with the basics of playing the game.

I hope that you enjoyed this series on using Minetest. Please feel free to contact me on Twitter (@moniquefranzsen) to chat about using games for learning.

Previous - Learning with Minetest Part 2: Activities and Aims
By Unknown - September 09, 2016 No comments:

Just a quick one today, in between Minetest updates.

Next week is our Wow Day at school. Our Wow Day is similar to a parent showcase, the children have their classwork and artwork ready to show to their visiting families. We had been asked to create an invitation for Wow Day and it was a great excuse to polish up our MS Word skills. I had provided the Grade 2s with a very standard template for an invitation to our Wow Day. It looked something like this:

Functional, but not very exciting. Within an hour lesson, they managed to transform their bland templates into these!


Skills that we worked on: 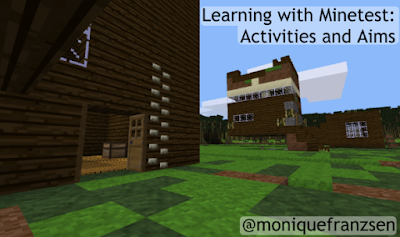 It's been 3 weeks since I set up Minetest in the computer lab at school. I wrote more about the installation in my previous blog post here. In this post I want to discuss the various activities that I organised, the worlds that I hosted and what aims I gave my students.

Before we started, each class and I formulated rules about our Minetest experience. It was important to spend the time having conversations about appropriate and inappropriate behaviour, and for the guidelines to come from the players themselves. This all helped to facilitate student buy-in to the rules agreement. All of my classes settled on something similar to the following:

Use your real name was a rule that I added, we had a great discussion was had about nicknames and personal information but since I do already know their names as their teacher this was for practicality more than anything else. If someone broke the rules, they were not allowed to play any more of Minetest that session. Most classes brought up the idea of accidents. We discussed about how something was accidental or on purpose, and what to do if you accidentally broke a rule.

All of my students aged 5 - 9 started off Minetest life in a custom-built obstacle course which I called the Training Centre. Taking ideas from what I've seen of the MinecraftEdu tutorial online, the students had to follow the blue line through tutorials on movement and interacting with the world. Signs were littered everywhere so that students who wanted more information could read them as they went along. About a third of my students were able to race through the training in record speeds, as they were avid Minecraft players. For the rest, the Training Centre was a valuable slow transition that gave them time to get used to moving with the mouse and keyboard at the same time.  Out of all my +/- 190 students, only 2 or 3 struggled with the controls by the end of the first session. All students were able to complete the training course within half an hour, with most kids finishing well before that. The Training Centre world was just a randomly generated world, and outside the structure that I built the students were free to explore the world proper.

Building in the Desert

For my Grade 1 students, their next lesson started in the middle of a desert. I had built a blue rectangular path around the area for guidance and as a landmark. The aim of the lesson was to build structures primarily using sand. The students already knew about the unusual property of a sand block, that it will fall down without another block underneath it. We talked about strategies to solve this problem. Many students took it upon themselves to explore further and find other blocks to decorate their structures with. What was important about this session was that with each class I was able to have a discussion about appropriate online behaviour in a shared space, which I will talk more about later in the next post. Each group of children managed their task in a different way, and it was fascinating to see how some formed group structures and some built their structure away from the shared area.

With my Grade 3 students, I flattened a rectangular area in the middle of a forest. I split this area up into 4 numbered areas and split my students into small teams. As they had recently started with the concept of perimeter in their classrooms, on the suggestion of their classroom teachers I worked it into the lesson. Each team had to work together to build a structure on their area of land, and I gave them a basic perimeter guide for it - with one class, for example, I said their structure had to be 6x6. We talked about how we could check our measurements, whether the 6x6 would look rectangular or square and so on.

I prepped this grade for the group work, I gave each group 5 minutes of planning time off of the computers (in the 'real world') to discuss how they were going to tackle the challenge. I pointed out that everyone on the team would have different skill levels and it was up to the stronger players to help the new players with the job. Quite a few students got hung up on the idea of digging down to get better resources so I nudged them in the direction of building with dirt and wood then upgrading their structures when they were finished.

The speed of their builds was impressive. Even though these were young children, they strategised their plans and built up their areas rapidly. Each group tackled the challenge in a different way. I loved the communication that I could hear within the groups: asking permission, suggesting plans and ideas, asking for help. Each team built a very different structure and when the time came to an end every class wanted me to keep their world safe so that they could continue building another time. Some classroom teachers suggested we keep Minetest installed as a reward activity which I think is a great idea given the high motivation of the students.

My students simply didn't want to stop playing Minetest. A number of them have asked how to get the game at home, even though they already play Minecraft. They are enthusiastic about the idea of using Minetest in a class to complete a common goal, and get deflated when I explain that our Minetest game can only be run locally, in the computer lab. Their next question is when the next time to play Minetest will be!

In the next post, I will be discussing the impact of using Minetest in the lab. I noticed many different areas of learning that I hadn't even anticipated so I'm looking forward to sharing those with you.