Phew, this has been a bumper crop of blog posts this week! These activities and photos were all captured earlier in the term but I haven't had the time to write them up until now. 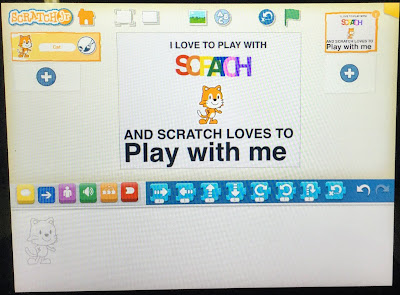 After our Unplugged week, we started with Scratch Jr. There were two reasons for this. Firstly, it seemed like a natural progression from solving concrete puzzles on the floor with 'arrow code' on whiteboards to Scratch Jr's block code, largely featuring arrows. The other reason was that our school network was still recovering from the lightning damage and my plans to use Google Slides were on hold due to no connectivity. So, we dived right back into more coding.

I immediately found that Scratch Jr was completely accessible to students of all ages. The blocks are large and intuitive and the app comes loaded with a large number of sample projects that you and your students can pick apart for ideas. Once I gave them a short intro session to get them comfortable with the layout of the app, my students tucked in under the tables and gave it a go. I hope my students aren't the only ones who enjoy hiding under the desks when working with iPads? They almost all choose it over sitting at their tables. 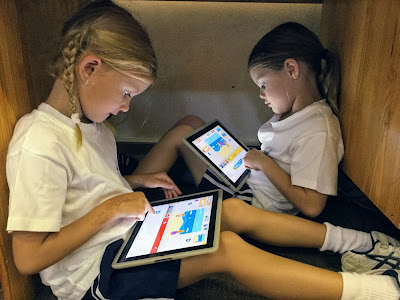 From the beginning, the narrative prospects of Scratch Jr shone. Students wanted to tell stories with it, right away utilising the voice recording block to add sound effects and speech to their creations. Student choreographed dance routines and loved the stage background where they could showcase their dancers. My Grade 0 students particularly loved the activity where we turned the default Scratch Cat into a space cat and got it to dance. This project let them display their creativity with altering the Scratch Cat sprite and no child had the same outcome as another. 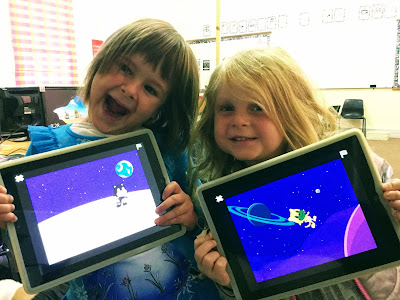 The possibilities of Scratch Jr are vast. I can see multiple grades using this app to recreate familiar narratives like The Three Little Pigs and programming the sprites to move to enhance their story. I can see older grades using it to make a choice story - one where a choice the player makes changes what happens in the game. We will defninitely be using a lot more of Scratch Jr.

Over the last term holidays, we were unlucky enough to have lightning strike near to our school during a storm. We lost large portions of our network switches and machines, and our technicians have really been superheroes in getting everything up and running in a couple of weeks. Due to this, I had to be flexible and rapidly adjust my curriculum plans. On the upside, it has given me precious time to investigate coding, both plugged and unplugged, with my students.

Thanks to some amazing folks on Twitter, I came across some great unplugged resources. I was participarly inspired by what teachers were doing with BeeBots. I don't have access to BeeBots, but, I do have access to masking tape and a floor!


Using a handful of small, wheeled toys that I picked up at a  local shop, I began to lead all of my students through a week of Unplugged content. Some of my students remembered the word algorithm from the sandwich robot activity that we had done previously. We talked about this unplugged coding being like a puzzle that they had to use rules to solve in order to achieve specific goals - like reaching a square marked as the school. 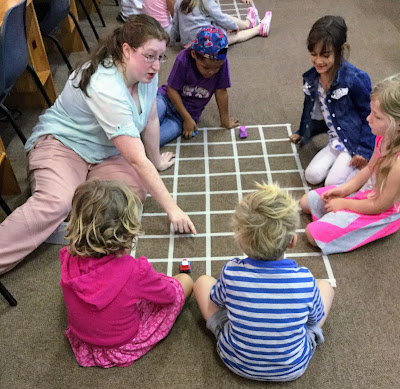 I led each class through some puzzles together, where they all took turns to move our car through the obstacles I had set out. I witnessed unbelievable patience from students as they waited to try out their code. We all wrote out our code on whiteboards, which was invaluable as I began to teach them about debugging their code and fixing mistakes they notice along the way. 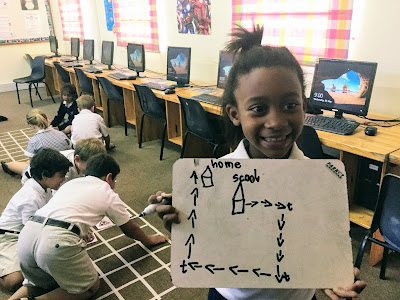 Unplugged coding was not only embraced by the younger students. My oldest students loved it just as much. I was able to let them split off into smaller groups to debate how they were going to solve the puzzles. Some groups were even able to create challenges for each other to navigate through and race to see who could finish a puzzle in the least number of moves. 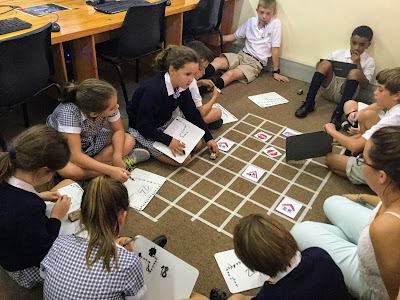 Many groups didn't want to stop at the end of the lesson and asked me to take photos of their coding grid so that they could carry on next time. One Grade 3 group wanted to continue playing into break! It was so refreshing to see these digital natives enjoy such an analogue concept. There were no screens, just cars and whiteboards and a set of rules. 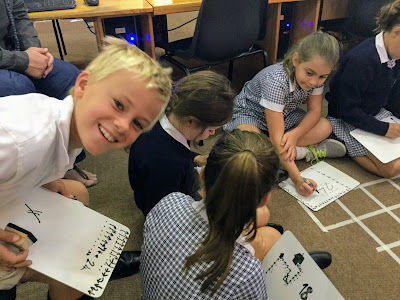 The students gained a solid understanding of what algorithms were, and how coding could be used to solve problems and puzzles. All of my students could create and debug simple programs using what we dubbed 'arrow code' on their whiteboards and some understood that shorter code was more efficient. For me, this unplugged week was the perfect introduction to coding using apps. 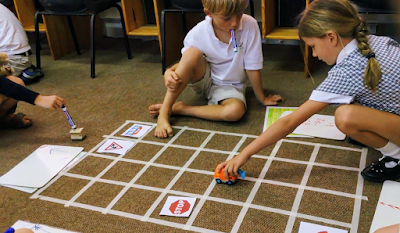 
This year I opened applications for our first ever group of Digital Leaders. Working within the framework of our Junior Primary club time, I had thought that I might have a small handful of interested students. I was happily surprised to end up with 16 Grade 2s and 3s that are bursting to learn more about technology and share it with their friends and teachers.

Our first outing was to our Learning Commons, where Mr Kirk has painted an entire wall green to facilitate and encourage green screen experimentation. Our Junior Primary iPads have the Do Ink Green Screen app installed. We talked about green screens and why they could be useful. I helped my students find the app and open up the great in-app tutorial video. I especially appreciated that the tutorial was led by a child as it helped my students feel that they could master this tool. I gave them no other instructions except to "figure out how to get this working".

The next 30 minutes were exciting and very noisy indeed. My students embraced the challenge I had given them and did, in fact, manage to get the layers working correctly to produce the green screen effect. They used images on the camera roll as background layers. Here are some of the results of our experiment: 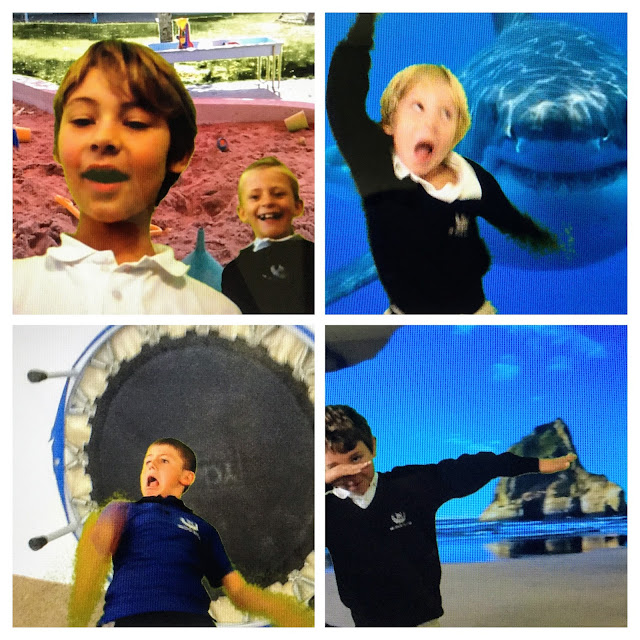 I asked our Digital Leaders if they thought we could use the green screen in our IT lessons and it was a resounding yes. Here are some of the ideas they came up with:

I want to tell you about a great lesson that I did today!


Last year we hadn't yet moved to GAFE. This was the lesson I did last May:

I knew that this lesson needed spicing up for this year. I wanted to teach students how to label an image but wanted to make it feel more enjoyable and less cookie-cutter. Google Slides made this possible.

I learned a fun new trick at the EdTechTeam Summit: On Google Slides, you can add a background image to a slide. The background image cannot be moved or manipulated once added, which is ideal for my age group. This way they can add to an image without accidentally changing or deleting it.

I chose to add a picture of an empty fishtank into the background and acted surprised when we opened it. Where was Bubbles the Fish? My students were surprised by this turn of events and so I suggested we try and find a replacement fish using the built-in Google image search. By allowing them to choose the fish that we labelled, I gave my students agency and control over their own work. It also allowed me to teach them two brand new skills instead of just one! Bonus!


Once they had chosen our fish, they then had to start working on our labels. As they all had different background images, they had to change their font and arrow colours to be seen clearly. This lesson was a great learning experience as working with the arrow tool can be fiddly at times. My students took great pride in making their piece of work unique and are looking forward to printing them to show their class teachers.