Prettying Up the Place with Pom-Poms!

I'm writing today to bring you another update to the library decor. Unlike most of my ideas, this one was conceptualised, planned and carried out within the space of a week! In the library, there are a lot of support beams high up on the ceiling, not to mention an awful lot of plain ceiling space. I've been brainstorming how to jazz up this space to make the library more jolly and attractive. When I came across this idea this week, I felt that I had found something that might work.

Using Cicelie's excellent tutorial that I found on Chintzy Couture (via Pinterest), I decided that it couldn't be too difficult, even for a non-crafty person like me. I cut up a small cardboard box into two circular templates and set about wrapping up my tulle, similar to how you would make traditional woolen pom-poms. I have a very faint memory of attempting a woolen pom-pom when I was about 5 or 6 years old in a Rainbow group, which was only brought back when I started this craft! 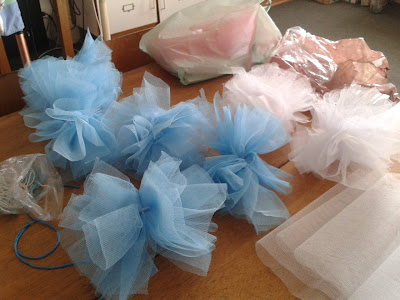 This is a shot of about half of the tulle pom-poms finished. I was absent minded and didn't think to take photos of my creation process. If you want a guide, though, the tutorial I linked above has really great information (and additional discussion in the comments). I read through it in the morning and spent the day making pom-poms. 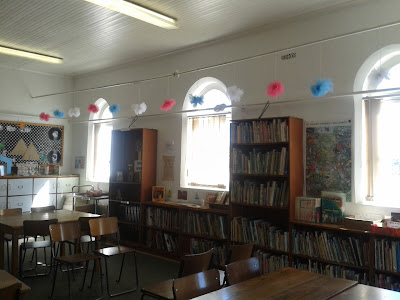 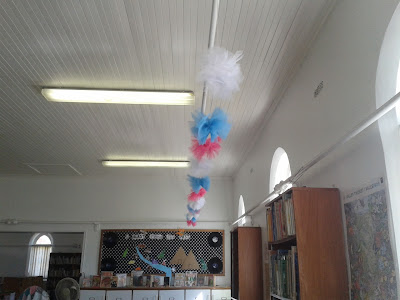 I got enough material for 15 tulle pom-poms in total: 5 blue, 5 white and 5 pink. I spent most of my Friday balancing on library tables and stringing them up. I'm quite pleased with the result.
By Unknown - August 25, 2013 No comments:

This post is to show off one of the new additions to the library this year: a suggestion box! I wanted it to be something the students wanted to use, that was eye-catching and would encourage them to provide suggestions about the library. In July, inspiration struck me. I looked around on Pinterest and Google for some monster crafts, and came up with this cute little thing (click the pictures to make them larger): 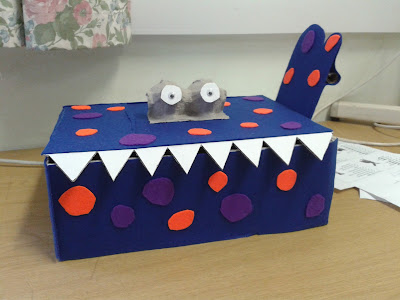 This is the Suggestion Monster! This afternoon, I had just finished emptying him of suggestions, he was totally full. I covered him in felt for body and spots, then I just glued some egg-carton eyes (with googly eyes) onto the top of him. Originally, he was a shoe box, which is why he has the 'hand' flap. I glued a roll of cardboard to the hand flap to let him hold his own pencil, which the students love. I cut off the other flap, and cut the front flap into the jagged teeth. The box mouth lifts up so the suggestion notes can be put inside. He took about 2 days to finish, in between regular library work. 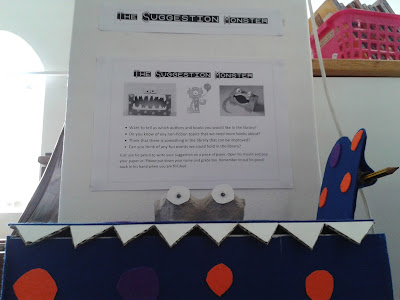 He sits on the computer table, underneath a page which gives the students some guidelines about what to suggest. Since July, students have regularly used the suggestion box. Usually, they suggest authors or books they would like, but occasionally they have even given me suggestions for events the library should run and the library layout. I'm happy that he continues to be such a popular feature of the library.

We have started training up a group of student library monitors, who are doing an excellent job in assisting me with re-shelving the book returns and tidying the shelves. Each monitor has chosen a shelf to be in charge of, and I have started awarding a Shelf of the Week label. This idea has come from multiple librarian blogs, thank you all so much for continuing to share your creations! 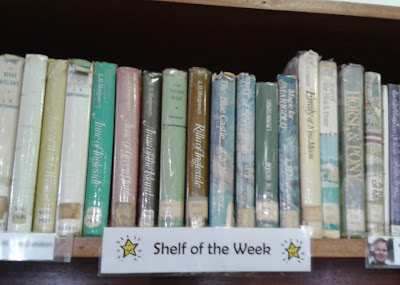 It's hard to believe I've only been working at this school as a librarian for only 3 months. 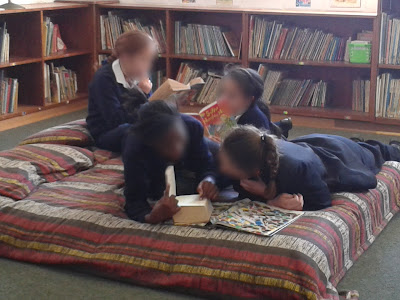