Waiting on the World to Change - Overcoming Negativity

After hitting up the CT EdTechTeam Summit and meeting all of the fantastic educators out there, I have begun to analyse my own practice a bit more. My first reaction when faced with all the cool stories about what others were doing in their schools was a bit negative, to be honest. I was thinking things like: 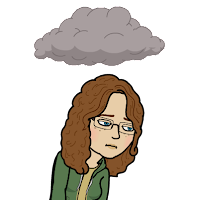 It was all so negative! I didn't want to let myself fall into a negative spiral, especially after being exposed to new ideas and energy at the Summit. Negative thinking can really drag you down. When I started school last week, I let myself take a good long look at how my lessons were going. Some lessons, mostly the ones where I was brave enough to try something new, were great. Others, where I was clinging to old activities and routines because of convenience and the fear factor, were not so great.

Those negative thoughts that I was having were all excuses not to make change! I was using the things I couldn't change as reason to give up entirely on my new ideas. Just because I can't change the culture of an entire school doesn't mean I should stop innovating in my own room. I was thinking in that way because I was afraid - to try something new, to stand out, to be brave.

There are so many things I want to try this term. Here are some that I am investigating:
All of these things are fantastic ideas! They fill up my brain with a happy buzz and would be, without a doubt, hugely beneficial to my students. Instead of being overwhelmed with doubt about whether they could happen and if I have the time and resources and if my teachers will be supportive and if my students are capable and... if, if if!

There's an earworm-y song I'm sure you've heard called Waiting on the World to Change. There's a great line in it that is applicable to what I'm going through at the moment:

"It's hard to beat the system, when we're standing at a distance" - John Mayer, Waiting on the World to Change


When faced with aversity, it's the easy route to kick back and decide not to try and make change happen. I see this happen with my colleagues. It can feel like roadblocks are put up no matter which route you take and your ideas are blocked at every turn. Regarding other projects, I've heard:
It may be that projects and new ideas are flawed. It's good to have criticism of an idea, but very often criticism and not making change is the easy option. It's easy to pick on the flaws of a proposal and difficult to make it happen. But the benefits of making a good change happen far outweigh the negatives. Instead of lettting those negative thoughts get you, try changing it up:
I, for one, am not going to let my own negative thinking undermine my plans. I can make change happen in my own sphere of influence, no matter what size that may be. I can improve my own practice by bringing in new ideas. Even if they don't go exactly as planned, my students and I will both learn enormously. Isn't learning the whole point of school?

Sharing our Stories: Finding your People

I'm going to steal my opening of this blog from the amazing Keynote speech I was lucky enough to attend on Wednesday:

Once upon a time there was a little girl called Monique.

This opening is important, because my theme today is about sharing our stories. It gets a little personal in this post today, ladies and gents.

The theme of storytelling resonated through Lindsay Wesner's Keynote at the EdTechTeam Cape Town summit. She told us to be brave, even if we didn't feel like were brave. She shared her own story and the stories told by her students. She encouraged us to share our teaching journeys on social media and to prove to other educators that great, revolutionary education could be possible here in South Africa.


After the summit was over, I was at a braai (barbeque for non SAians) with some other teachers who had also attended. My friend, Barbara, and I were wrapping our heads around the idea of sharing our stories - we wanted to find a platform for local teachers to do that. Earlier that day, Barbara had presented a session on using G Suite for Primary Maths and we had been in a conversation with the people attending, sharing hashtags like #gafe4littles and #primaryrocks where they could find more activities like the one Barbara had been demonstrating. We were giving them direct links to social media in order to connect and engage with other educators.

Then it hit me. We needed a hashtag. South African teachers needed a hashtag to rally around, to have a place to share their story and to promote good, local practice. After the braai I did some searching and found out two things:

1) #SAedu was already used, albeit infrequently, by South Austrailian educators
2) I also found out that back in my early, experimental days of Twitter I had started a list of SA teachers on Twitter. It was called ZA Edu. I checked the hashtag and found that #ZAedu was essentially unused.

And so #ZAedu was born.

I will be the first one to admit that Twitter didn't grab me in the beginning. I remember saying that Tweeting felt like standing on a box and shouting at a room of people who were having their own conversations. Sometimes it still feels a bit like that to me. In terms of building up a PLN (personal learning network), though, it is absolutely invaluable. The brevity of Twitter, which frustrates me, means that you have to be succinct to get your idea across. Over time I have come to see the value of Twitter more and more, as it allows instant connection with your peers. That is the magical part.

I never really enjoyed school as a child. I found it difficult to connect with other children. My mum kept me going with my very own mantra, that one day I would go to university and then I would find my people. I was the first person in my family to go to university, and I did indeed find my people. Through finding those peers, those people who thought and strived for the same things I did, I also found myself.

The same thing happened to me this week when I attended the Cape Town summit. Even though I was nervous and had to be brave every time I spoke to someone, I felt at home. My crazy ideas were not crazy! Instead of looking at me blankly, they validated my opinion, or, even better, asked a question. I had found my people. Twitter and social media is an irreplaceable way for us to find our people online, too, and hashtags are a great way to filter through the spaghetti tangle that is the internet.

And so Monique found her people.


I hope that we can use #ZAedu as a digital space to share authentic, enthusiastic teaching in South Africa. I know that is happening in other classrooms because I had the privilege to attend the summit. Not all of our SA teachers can go to a summit, so this can be our way of connecting. I want to see what is happening in SA classrooms on that hashtag. I want you to share your bright ideas and madcap methods. Show me the amazing work that your students and colleagues are doing. Sharing these moments with other educators will give them inspiration to be that force of change in their own environments. As a wise woman once said, we are those that can shape the narrative of education in South Africa.
By Unknown - April 09, 2017 No comments:

What a whirlwind of a day! I am just back from a brilliant masterclass lead by Lindsay Wesner, focusing on an excellent model of student-centered learning. My brain feels exhausted from all of the learning that I did today but I wanted to write up a quick post so that I can collect all of the great ideas I had, heard and shared.

The first area of focus was creating an inquiry hook, a really great question to engage students and get them to wonder why. I've heard of similar frameworks with regards to Genius Hour but I appreciated the added structure that Lindsay added. It is very difficult to come up with a good question! As I work in Junior Primary, I came up with: What makes our world so special? I planned to narrow down the scope of the answers using additional questions in order to structure the inquiry for my younger students, as my aim was to help them learn about the world, continents in particular.

Once we had our question, we had to create a method of scaffolding research for our students. Very often if you send them out to Google unsupervised then they fall into a rabbithole of online content. Similarly to how I use Symbaloo for managing young students on the internet, you can build an interactive slideshow using something like Keynote, Google Slides or MS Powerpoint. Your slideshow can be shared with the student and can be turned into a great place for the student to research while still following your method. Here is the quick sample that I mocked up today in Google Slides. I themed our research step as a top secret spy mission, because why not?


This is an excellent way of using the concept similar to a HyperDoc to enable students to do research in a safe, focused framework.

Later in the day we were asked to be both the teacher and the student. As a teacher, we had to create instructions for our students to do a task that demonstrates the learning they have done in the research phase. As students, we had to actually complete the task. I found this stage the most challenging as I don't often have to complete the the work that I assign! It really helped me reflect and re-evaluate on my teaching practice with regards to the tasks that I set and my expectations. Working as the students can let you find loopholes and snags that you don't antipicate in your assignments. I struggled to choose an app to show my learning, but once I overcame that I had a lot of fun attempting my first ever Tellagami:

There was so much packed into today, I have only chosen a few topics to write about. I really appreciated hearing from real experiences and opinions from authentic teachers. Thanks to Lindsay for steering us and Leigh Morris for faciliating like a boss, as well as Alan and Paul from Digicape. My fellow educators were absolutely fantastic and I look forward to connecting with more people at the next two days of the EdTechTeam Summit!
By Unknown - April 03, 2017 No comments: