It's the winter break for me, which is always strange when a large part of my life is online. The Northern Hemisphere is sweltering, at least, according to their Facebook posts. I've just discovered the joy of an electric hot water bottle and am living in my dressing gown and woolly socks.

My Hero Kids club ran well this term. All four students were thrilled with the conclusion with the story and the certificates I had made them. They blazed through the set module I had planned to use, so the last 3 sessions were on-the-fly adventures of going to investigate and retrieve a missing wagon from the forest. At the end of the session, Mayor Smith asked them to be the official Town Guard.


I asked them about advice for running the group again next term. One girl pitched the idea of an alchemist type class that "uses potions". The others asked that their characters be included as NPCs in the next game, "we want to be in the other story". All of them tried to wrangle their way back into the club again, which I consider a mark of success.


Our IT Lab received two new massive beanbags this term. We are still deciding when they should be used, but a wonderful opportunity happened recently. In South Africa, we frequently have power outages called 'load shedding'. This means that the IT Lab is basically useless. On this particular afternoon, though, a mood descended among the scattered group of aftercare children. Usually content to plug themselves into a computer while they waited for pick-up, they found that this avenue of distraction wasn't possible. When I came to check on them, a colleague of mine had flomped herself onto a beanbag and started asking for their help with ideas for an art project. A child was scribbling ideas onto the board in mindmap format. Another girl was sitting with the teacher, looking at designs. Even the boys, inspired by the creative mood, leaped at my idea of drawing and sprawled across the entrance (where you could see the best with the daylight coming in) and drew up their own creations. Load shedding is usually a huge headache, none of our tech has UPS or other battery power, but on this day the kids didn't care.


This term, the Grade 1s have suddenly become able to read and write! I love this spurt of literacy because I find that I can do so much more with them in the IT lab. They particularly love using MS Word to type out 'stories'. We try to use the sounds they've been learning, like the qu sound, that produced this masterpiece:

We've also been encouraging them to attempt their own spelling attempts before coming to us for help. The Gr 1 teachers have cleverly started asking children to bring their individual whiteboards and markers for spelling. This one is great, the student's attempt is first with my messy handwriting underneath:

Lastly, it's rare for me to get the cute notes that other JP teachers might get, since I am not a classroom teacher with my own little brood of students. I was lucky enough to have this very kind note given to me on the last day of term. Like anything in life, it's being appreciated that makes teaching worth it. 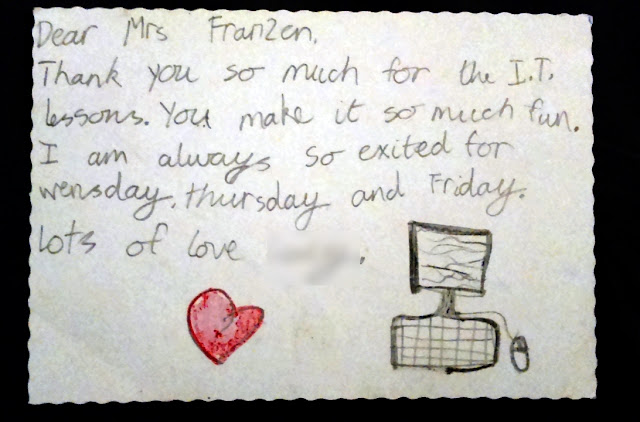