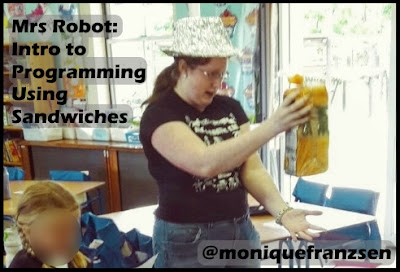 Term 4! The windy and wild term here at Bridge House School. A few weeks ago, my Grade 1 classes had a very special visitor: the one and only Mrs Robot!


I was inspired to try this crazy idea by a discussion on the CS Unplugged website about introducing programming concepts to young students. It lead me to this great video by Phillip Bagge showing his portrayal of a sandwich-making robot. I loved his use of a 'robotic' voice and totally hammed it up when I did my version.

Why did I pretend to be a robot?

We had a discussion at the start of the lesson about robots and what they are. They are machines that are programmed by people to do jobs for them. They have computer brains and they need very clear instructions so that they can do their job. My Grade 1s assured me that they all knew how to make a sandwich, so I asked them to go and write down their steps for making a sandwich. These steps, I explained, would be called an algorithm - a special list of instructions that a computer follows.

Testing out our sandwich code

After the children had written down their instructions, I said that we needed a robot to test the instructions out to see if they would work. At this point I produced my tinfoil hat and became Mrs Robot. Tiny robot earrings, a keyboard bracelet and a Comic-Con robot t-shirt completed the look. As Mrs Robot, I had to follow the students' steps exactly as written. This was a very creative, and messy, exercise as most of my students hadn't been very detailed. There was lots of spreading jam, bread and butter on all sorts of places as we didn't include steps like opening lids, picking up knifes and putting bread onto the plate. Here are some photos of the algorithmic mayhem.

My own favourite moment came near the start where one of my children told me to cut the bread, which was still in the bread-bag. He had already told me to pick up the knife so I bravely carved through the bread-bag with the knife, and then my bare hands. I admit that I gave a robot-roar of triumph when I managed to break the bag in two. That stunt set the tone for the day. As I'm sure you can guess, my students had an absolute ball. The teachers who were taking pictures captured so many pictures of the kids laughing. One class had a string of 3 students who accidentally asked me to spread butter or jam without a knife, by the third time they were on the floor laughing.

The lesson was a hit and many children were able to go back and refine their instructions to make them more clear. As the IT teacher I don't often get the chance to goof around and be silly, and I think my students really enjoyed seeing that side of me. I've already been asked to bring out Mrs Robot again next year!