As of today, I'm officially a Google Certified Educator Level 1!

Thanks to my PLN

I discovered the Google certification through my fantastic global PLN (Professional Learning Network) colleagues on Twitter. Earlier this term I began a conscious effort, inspired by the podcaster Chris Nessi and his show House of Ed Tech to improve my professional development. I've had a Twitter account for years but only in the last few months I've started to use hashtags and follow edu-chats. Prior to this I considered Twitter a 'soapbox' platform, but some time and attention has proved that there is some great learning spaces there. I love seeing what teachers are doing and thinking all over the world, and Twitter has been the vehicle to help me digitally meet other educators who are passionate about the same things as I am.

What you need to know about Google Certified Educator Level 1

A quick Google (ha) will reveal that the test-takers are asked to sign an NDA so I can't tell you the exact details of what the exam was like. I admit that at first I under-estimated the difficulty of the test but after some time I figured out that Google are very thorough! I hugely appreciated the interactive, hands-on elements that you experience. The study material that Google provides is well-written and a great tool for professional development, I highly recommend going through it as it guides you through everything you need for the exam.

You will need a webcam as the exam relies on your live feed for proctoring. They do ask you to take a picture with it right before you start, claiming that it is for your certificate, but mine wasn't used for my certificate. I had brushed my hair and everything!

You will also need a stable internet connection. Despite having pretty good home internet for South Africa (10Mbps), the connectivity was a tad problematic. Once, after the connection dipped, the exam portal gave me the error that I was inputting answers for the wrong question! I solved this by closing the tab (despite the exam page protesting) and quickly opening it again. When the exam resumed I was in the right place with no harm done. Although this made my anxiety levels rise, it turned out to be a minor blip.

Overall, I enjoyed the process of studying for and taking the Google exam. I've had a look at the study materials for level 2 and it looks far more in-depth than level 1. Once I can get more experience using Google Apps for Education in the school setting then I think I'll be equipped to tackle level 2. 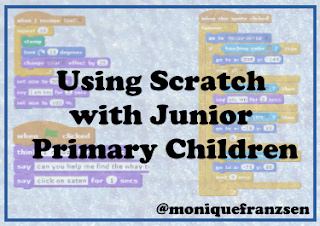 This post marks the end of an 11-week adventure. For the last couple of months I have been running a Coding Club for a group of 8 and 9 year olds. I wrote briefly about this in May but I thought that a more comprehensive wrap-up post would be fun for me and formative for you.

At our school we are lucky enough that each week we have some time set aside for Clubs. In club time our teachers host a variety of interesting, hobby clubs that our Grade 2s and 3s choose from voluntarily. It's a great exercise in student choice, that they don't have to choose an activity based just on what their friends are doing. We encourage them to choose an activity that is something that they personally would really like to do.

My eager bunch of coders had a mixed background - some had participated in Coding Club last term, some had taken part in the Hour of Code we did last year and some had never done any coding before. They were incredibly enthusiastic, particularly because I had framed our club around making games.

We used a freeware program called Scratch for our club. In case you haven't heard of it, Scratch is a hugely popular program where click-and-drag blocks are used to create instructions. It's very kid-friendly even though what you can create can get quite sophisticated. I had never learned coding before becoming a teacher and Scratch is a great introduction to the concepts behind coding, Coding has method and logic attached to it, and Scratch teaches that using method and logic can produce art, games, puzzles and even more. Coding has really become a type of 21st century literacy and Scratch propels that form of literacy forward.

CS First is a fantastic website that creates entire Scratch coding courses around themes. Our limited bandwidth means that I couldn't use the CS First built-in courses that function with the Scratch online site, so I used their course materials and an offline version of Scratch. Click here for instructions and links to what you need to get Scratch running offline. Our coding club was built around the great Gaming module on CS First. Each week I would take the group of students through a Scratch template projected on the board and demonstrate what coding blocks we would be using for that lesson. Then I let them loose on their desktops, sometimes in pairs or on their own depending on the activity.


The Benefits of Using Scratch at a Junior Primary level:

I was incredibly impressed with the focus that this group of kids had. Despite their young ages, they managed to grasp the outcome of what I was steering them towards and really went for it. I learned along with them as we created:


The Challenges of using Scratch at a Junior Primary level:

There were very few challenges that we found. The offline version worked well and was very stable.

Navigating file structures: We were able to save our projects into our local drives and retrieve them, and though some of my students still struggle with a Windows file structure we managed fine.

Reading: Literacy levels could be a barrier to enjoying Scratch because although the blocks are colour-coded the students still had to read the functions of the blocks. Using Scratch enhanced my students' vocabularies with words they were not using before like degrees, co-ordinates, sprite, percentage, function ... the list goes on! Coding was so fun that it was great motivation to tackle any tricky reading required.

Expectations: When explaining the concept of coding to my students, many wanted to immediately create Minecraft or Clash of Clans. It took a bit of work to get them to have realistic goals that they could achieve in a few sessions. Once they got the feeling of what they could do with Scratch, they regained their enthusiasm and really started to experiment.

At the end of our last session I awarded certificates to all of the students who took part. They received them with such genuine glee that it really made my day.

I would highly recommend Scratch for anyone who wants to introduce coding to primary-age children. It's offline client really saved us because so many amazing online tools are just not reliable for us yet due to our limited bandwidth. My students loved their creations and will now often choose to play on Scratch during free-time during IT time.